Developed for a Young Adult audience, the supernatural drag drama set in Berlin, uses the city’s famously hedonistic, nocturnal LGBTQ+ club culture as the backdrop in which to tell the story of a vampire community that’s fighting to find its place in the world, through the eyes of young performer, Everett.

Vamping was created by shooting star Matthew Jacobs Morgan (The Rig, PompeII), the London-born writer, director and producer who was recently named as one of Deadline’s 2021 rising stars, as this project unites him with German-born multi-disciplinary artist and screenwriter Sophie-Yukiko Hasters.

As a central figure in QTPOC (queer and trans people of colour) community in Berlin, Sophie brings an authentic vision and voice to the series using her experience of German Ballroom Culture; where she oversees the German faction of the Iconic House of Saint Laurent – one of the oldest Ballroom Houses featured in the critically-acclaimed documentary, Paris is Burning.

A youthful and heady mix of Pose and The Vampire Diaries, Vamping follows young British drag queen, Everett – a young, black, brash, queer performer – after he wakes up the find something very wrong… Having celebrated a bit too hard after a triumphant performance at Berlin’s hottest drag club, Dragged Hier, he finds that he has unwittingly been turned into a vampire. Terrified, angry, and unsure what’s happened to him, he sets off to uncover the truth and finds himself the protagonist in an impending culture war between vampire tribes.

Introduced to a whole new side of the queer world that he never knew existed, Everett is torn between his former love, life, and friends, and The Untamed; a vampire community who live entirely underground, deprived of all joy and hope, that want to get rid of humans once and for all. Bouncing between the sequins and camp frivolity of the drag scene and the darker side of human nature and systematic marginalization, the series celebrates otherness, belonging, chosen family and finding your place in a fractured world where being different is frowned upon.

A true German-UK collaboration in front of and behind the camera, this exciting and fast-paced script moves elegantly between English and German, as Berlin itself becomes a central character in the story: From the industrial inner city to an abandoned Soviet era missile silo on the outskirts, to the ghostly forests and lakes; the city represents a world where old meets new, tradition meets progression and fantasy meets fear.

Al Munteanu, founder of SquareOne Productions, says: “Vamping is a supernatural drama about Drag Queen Vampires. This already gives you all you need to know.  It is with these words that Matthew Jacobs Morgan piqued our interest years ago. We further developed the script with him and our partners at Vertigo Films and knew immediately, that we were on the right track to locate the story to Berlin and pair Matthew with German-American multi-talent Sophie-Yukiko Hasters for this story to finds its unique voice. This is a show that celebrates otherness. When rejoining forces after the Street Dance franchise, Allan Niblo and I we knew we that together we understand brash, bright and in-your-face!

Allan Niblo, co-founder of Vertigo Films, said: “Vamping is bold, bonkers and brilliant! We’re extremely passionate about exploring many of the topics that young people are grappling with today, whether it’s championing queer representation and visibility or challenging societal expectations and trying to understand the world we live in. Young people want to see themselves represented in a fun, meaningful and exciting way and Matthew’s vision, alongside Sophie’s experience and background, could not be more perfect in achieving that for Vamping – they will bring an authenticity to the script and characters that is so rare to see on screen.

Matthew Jacobs Morgan, creator, said: “I’m so excited to be writing a show set in one of my favourite cities, and through a genre lens which I have always been obsessed with. We’re blurring the lines between queerness and vampirism in a way which explores otherness, belonging and community whilst also bringing a noisy, queer joy to the forefront with a brilliant army of creatives by my side.”

Sophie-Yukiko Hasters, writer, added: “It have loved working with Matthew to bring Vamping to life and to find its unique German voice, and to explore painting a new portrait of Berlin and its inhabitants – a city and a community that is obviously very close to my heart”

Vamping is executive produced by Allan Niblo for Vertigo Films and Al Munteanu from SquareOne Productions. The series was created by Matthew Jacobs Morgan and written by Matthew and Sophie-Yukiko Hasters. The production will draw on talent from minority and underrepresented communities both in front and behind the camera, with casting taking place in the coming months. 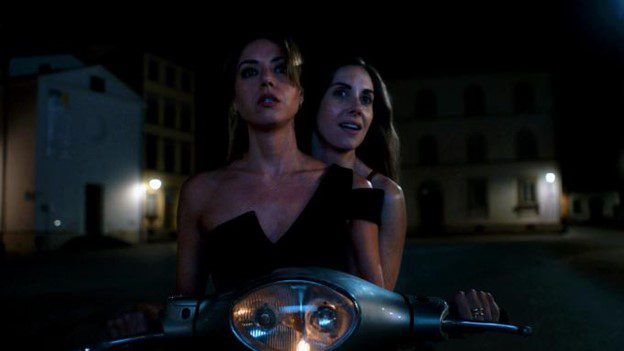